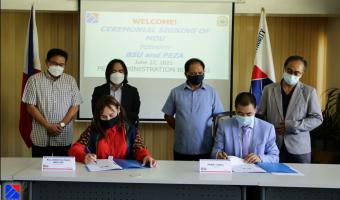 Baguio City – In an effort to generate jobs for Filipinos and thereby match labor needs of various export industries, and produce high-quality workforce and employment in the Philippines, the Philippine Economic Zone Authority (PEZA) Director General Charito Plaza led the signing of  Memorandum of Understanding (MOU) with two prominent universities in Baguio City namely the Benguet State University (BSU) and St. Louise University (SLU), and the signing of the Deed of Donation and Acceptance Ceremony to three chosen schools last Tuesday, 22 June 2021.

The PEZA-BSU MOU Signing and the Deed of Donation and Acceptance Ceremony were held at the Baguio City Economic Zone (BCEZ). This was then followed by the PEZA-SLU MOU Signing at the university premises of SLU.

Plaza expressed, “This is indeed a very momentous day since we have just signed the MOU with two of the top universities in the Philippines, the Benguet State University and St. Louis University.”

The MOU aims to foster and develop a mutual partnership for the establishment of a Special Economic Zone (SEZ) Institute. The latter aims to serve as their joint organizational body and institutional facility to represent a shared commitment to study and install programs that will establish a locally-positioned promotion strategy for export-based investments in Benguet and Cordillera Administrative Region (CAR).

Further, PEZA and BSU aims for possible economic cooperation through research, instruction, production, and extension that shall serve as their platform for strategic goals and policy direction.

BSU President Felipe S. Comila has expressed his gratitude to PEZA stating that, “It is really a great privilege to be signing this MOU with PEZA for the purposes of economic [and academic] development. This is now the beginning; therefore, it is important that we have a vision to have mutual cooperation and be agile in our actions. We must leave a legacy for the Benguet community and CAR.” 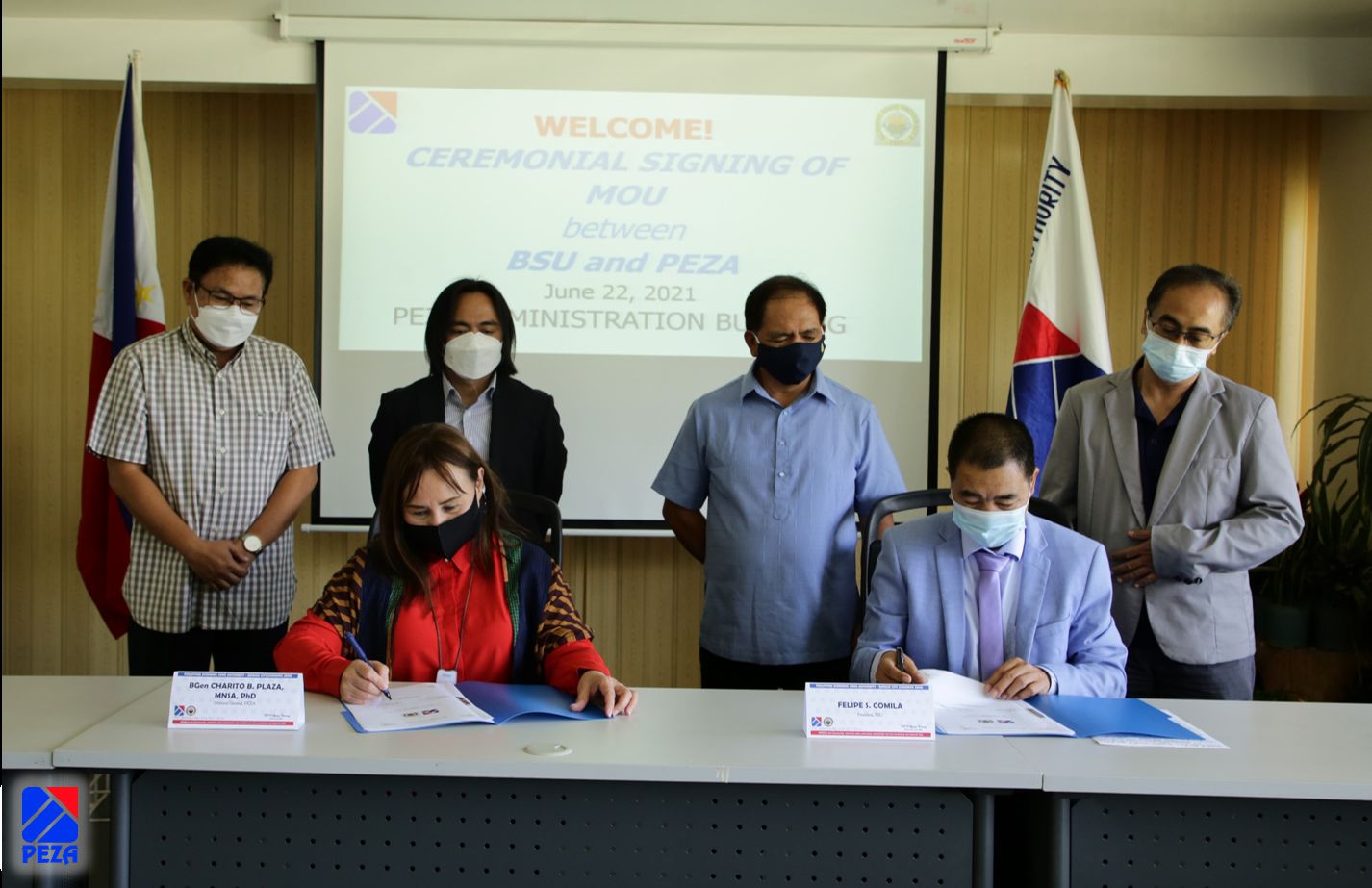 The Deed of Donation and Acceptance Ceremony

The PEZA Chief also signed the Deed of Donation and Acceptance in which desktop sets, other equipment, and furniture are given to three (3) schools: Buyagan Elementary School, Kias Elementary School, and Guisad Valley National Highschool.

This is in line with the PEZA-BCEZ Corporate Social Responsibility (CSR) Project and to contribute a share for the cause of education of Filipino learners through the Adopt-A-School Program of the Department of Education (DepEd). It aims to further nurture the youth’s education in Baguio City to become well-educated and well-trained learners. 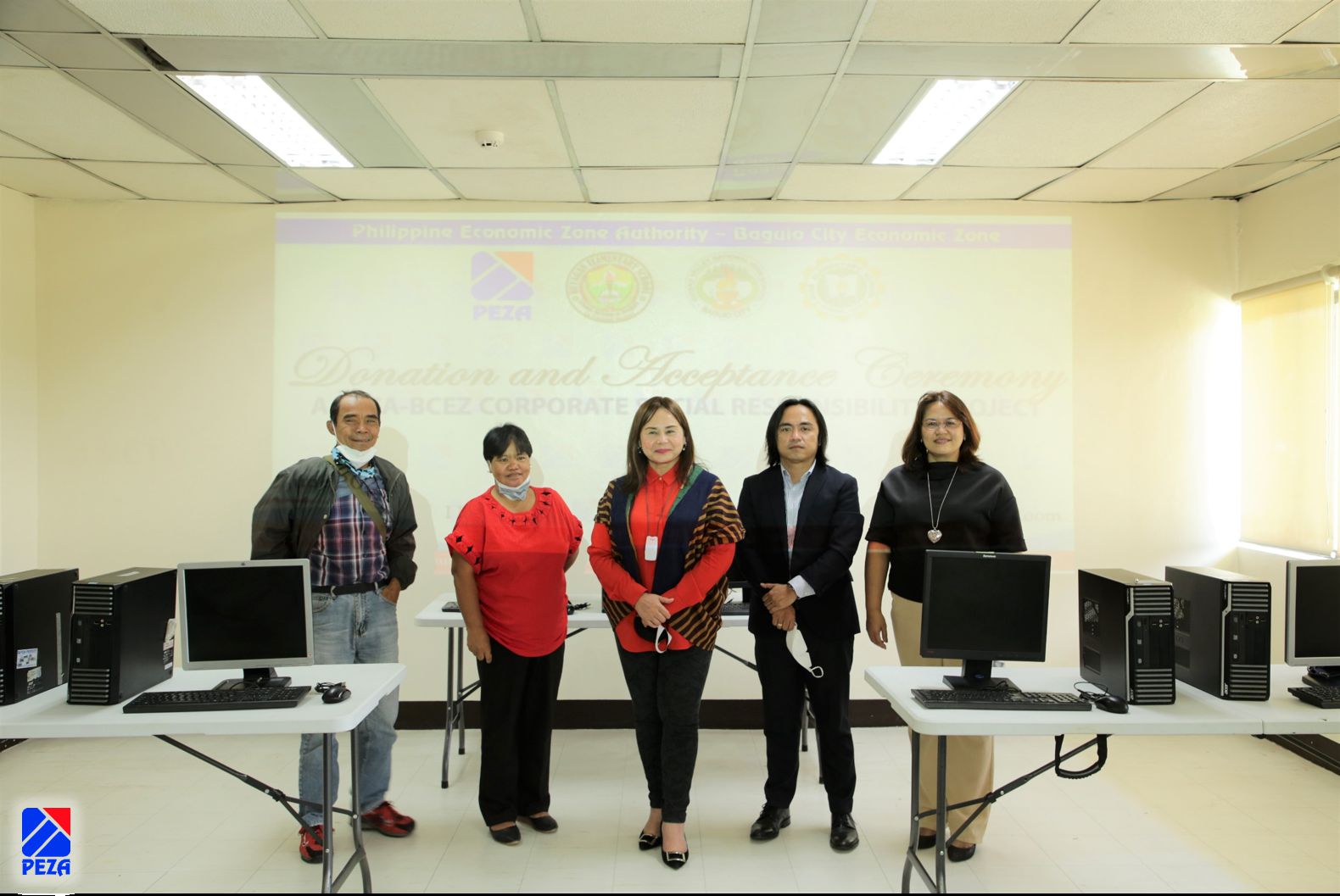 PEZA Director General Plaza and OIC-ZA Atty. Ross Vincent Sy with each representative from three (3) schools during the Deed of Donation and Acceptance Ceremony in BCEZ.

On the PEZA-SLU MOU Signing

Representing the academe and a government agency, St. Louis University (SLU) is now in partnership with PEZA that shall recognize the vital role of SLU in helping the government develop and promote the Cordillera as an export-oriented regional economy in the Philippines.

SLU President Father Gilbert B. Sales, CICM, PhD proudly stated that, “the MOU Signing with PEZA is a positive step as the timeliness of this joint endeavor has never been more favorable since we need the right push to recover and to return on track to accomplishing our respective institutional goals in the service of our people.”

Sales also expressed that the SLU recognizes and supports PEZA’s creation of Knowledge, Innovation, Science and Technology (KIST). “Research and development play a crucial role as they are the twin components of applied knowledge that can hugely improve and impact the export industry as well as the spur of national economy process,” he said.

In line with PEZA’ Transformational Roadmap with the goal of making the Philippines as an investment haven in Asia, Director General Plaza stated, “PEZA has developed a new type of economic zone known as SEZ Institute and training centers that shall be built in every region in public ecozones, SEZ, or in KIST Parks (SUCs, private universities) according to the skills and manpower needs of RDC/LGU-identified industries, integrating TESDA, DOST, and other government and private sector skills training programs for ecozone and industry workers.”

Partner schools shall bring their expertise, technology, skills, and degree programs as required by investors in various industries such as in IT/BPO, manufacturing, refinery, tourism, agro-industrial, medical and pharmaceutical. This in turn will transform the Filipino youth into multi-knowledge, multi-skilled, and world-class workers.

PEZA will assist SLU and BSU in exploring its potentials and academic assets into becoming a KIST-SEZ Institute. Plaza along with these universities is positive that continued cooperation is a must to achieve a higher cause. 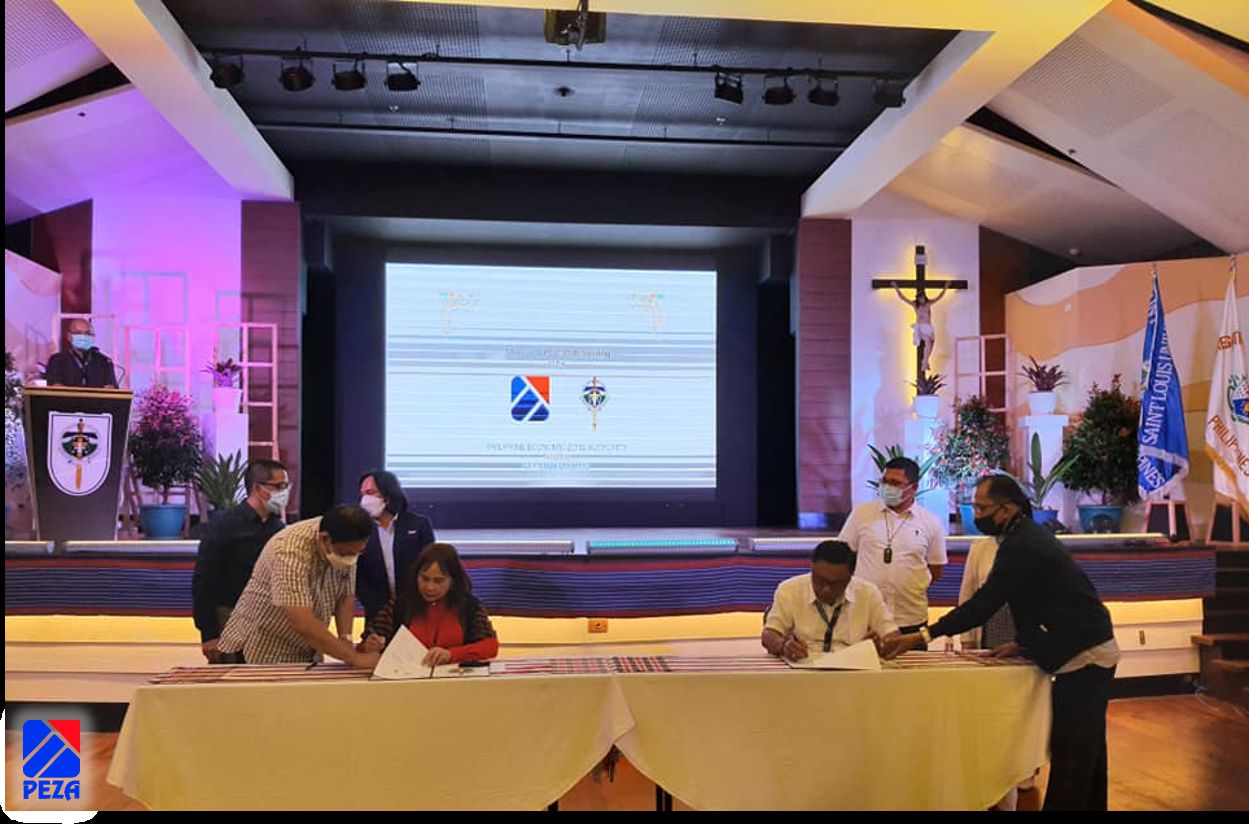 PEZA Director General Plaza with SLU President Father Gilbert B. Sales, CICM, PhD during the MOU Signing at the university premises of SLU.