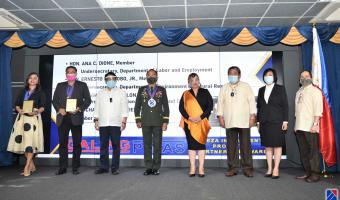 After the PEZA Chief delivered the State of PEZA Address (SOPA), the said awarding was conferred to PEZA’s government partners, Investment Promotion Agencies (IPAs), the PEZA Board, Industry Associations, Foreign Chambers various stakeholders, and selected Ka-PIPPs partners for their relentless assistance, contribution, and support to PEZA’s programs. These include in the areas of economic zone development, investments promotion, community projects, policy, and legislative actions or advocacies that are aimed to the overall goal to fully industrialize and promote the Philippines as an investments haven in Asia.

The list of awardees was divided into seven categories namely, government partners and Investment Promotion Agencies (IPAs). IPAs are government entities in charge of promoting investments, administering tax and non-tax incentives, as well as overseeing the operations of the different economic and Freeport zones in accordance with their respective charters.

Further, Industry Associations, various stakeholders, and Foreign Chambers of Commerce were recognized for their unceasing efforts as PEZA’s outstanding PEZA partners and locator companies. Chambers of Commerce plays a vital role in linking, associating, and growing businesses in the Philippines by providing useful information practical assistance to companies that are planning on outsourcing to the Philippines.

Lastly, in line with the 10-point programs and special projects of PEZA that seek to build partnerships with international and domestic business chambers and industries’ associations, PEZA recognized various agencies and institutions, also known as Ka-PIPPs. With this partnership, PEZA hopes to continue connecting and attracting global investors into the Philippines, despite the challenges of a global pandemic.