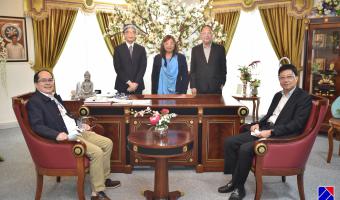 Pasay City – The Philippine Economic Zone Authority (PEZA) has officially granted Philstar Marketing Development, Inc. its registration as a developer/operator of First Bulacan Business Park (FBBP) in Malolos, Bulacan, the first mixed use ecozone in the province following the signing of its Registration Agreement on 27 January 2021, under Certificate of Registration No. EZ-21-01.

This comes after President Rodrigo Roa Duterte issued Proclamation No. 1070 granting FBBP the status of a “special economic zone.”

“We thank President Duterte for the proclamation of the First Bulacan Business Park, which is the first pharmaceutical ecozone registered under PEZA,” said Director General Charito “Ching” Plaza.

Envisioned to be the premier ecozone in the country that will host pharmaceutical and support IT companies and export-oriented industries, FBBP plans to adopt smart technologies and renewable source of power inside the ecozone to meet locator companies’ demand for a sustainable business environment.

Bulacan Governor Daniel Fernando likewise manifested his full support to the proclamation of the ecozone dubbed as “The Pharma Park of the North.”

Plaza said, “The proclamation of FBBP will surely spur pharma-related research, manufacturing, and tourism in the country especially with the COVID-19 global pandemic.”

Citing the importance of the ecozone as an effective strategy to bounce back from the present crisis and to prevent it from happening again, the PEZA Chief noted that “PEZA will continue to do its best to attract investors that will create more pharmaceutical economic zones in the Philippines, making the country self-reliant, self-sustaining, and resource-generating in terms of producing our own medicines, medical equipment and supplies.”

In December 2020, Senator Francis Tolentino appealed to the government to speed up the establishment of pharmaceutical manufacturing zones to ensure the public’s access to cheaper medicines and help boost the country’s economic growth. Tolentino proposed Senate Resolution No. 580 urging PEZA and the Board of Investments (BOI) to fast-track its creation of pharmaceutical zones.

The COVID-19 outbreak has reaffirmed the need for investment in healthcare, pharmaceuticals, and biotechnology. As such PEZA, in addition to the existing medical tourism guidelines, is looking to explore adding to its new types of ecozones “Biomedical Innovative Center” to host leading Biotechnology Companies and Philippine startups (under Innovative Startup Act), including pharmaceuticals. This will be in the mold of Kobe Biomedical Innovation Cluster (KBIC), which offers a platform for networking businesses and institutes in their pursuit of innovative collaboration and groundbreaking discoveries in a wide spectrum of medical, pharmaceutical, and biological fields, including medical device and regenerative medical fields.

In support of the business continuity objective of the global pharma companies which are mostly located in Metro Manila, FBBP provides a redundant site outside NCR and in the countryside. FBBP is also in close proximity to the proposed Bulacan International Airport.

According to Plaza, “The creation of pharmaceutical economic zones in the country will also be officially included as one of the types of economic zones to be created by PEZA.”

“We aim to promote the creation and development of more world-class economic zones in every province in the country in line with the President’s Administrative Order (AO) No. 18. We are partnering up with the different local government units in harnessing use of lands in their respective jurisdictions by utilizing the overall millions of hectares of idle lands in the country and turning them into green, healthy, and sustainable economic zones,” explained Plaza.

The creation of different types of economic zones is part of PEZA’s 10-point program and special projects which has been adapted by PEZA as its transformational roadmap for the next 25 years.

The transformational roadmap aims to fully industrialize the country and make it an investment haven in Asia. This roadmap seeks not only to promote investments in the economic zones, but more importantly to address, in collaboration with other government bodies, the efficiency factors that expanding multinational companies are considering in making their investment decisions.