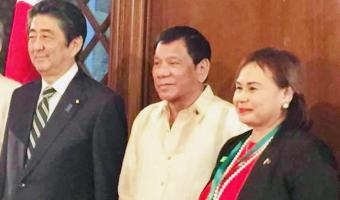 Pasay City – A seasoned leader with experiences in Congress, military, and local government amongst others, BGen Charito “Ching” B Plaza MNSA, PhD has proven again her leadership prowess as she reached her fourth year leading the Philippine Economic Zone Authority (PEZA) amidst the pandemic and implementing great balancing acts in managing the top investment promotion agency in the country.

“I am grateful for the opportunity to lead PEZA to greater heights and despite the pandemic. One’s leadership is tested in this pandemic and I humbly say I’m able to withstand the odds based on faith and rational and sound initiatives. At the heart of my hard work in PEZA is keeping and generating jobs for Filipinos, investments, and export income that boost Philippine economy,” said Plaza.

As the PEZA Chief, Plaza initiated major policy reforms particularly in revolutionizing the PEZA towards the goal of making the Philippine ecozones as economic driver & global contributor to supply chain.

Plaza is the second presidential appointee to the position of Director General since PEZA’s creation in 1995 by virtue of Republic Act No. 7916. Duterte appointed Plaza as PEZA Chief and she assumed the role beginning October 4, 2016. She is the co-author of Republic Act No. 7916 also known as “The Special Economic Zone Act of 1995” during her time as Congresswoman. Plaza has reached the 25th founding anniversary of the agency.

Since 2016 from the time of Plaza’s appointment to the present, PEZA recorded a total of 680.8 billion pesos of investments, a very significant portion of which comes from the development of new economic zones all over the country

In her time as PEZA Chief, Plaza is managing 408 economic zones and 4,587 registered companies and enterprises nationwide and her leadership helped to keep operations and performance of ecozones and to keep thousands of jobs amidst the seventh month of quarantines or lockdowns in the country.

Plaza said “PEZA has done positive changes and performance since 2016 even towards this 2020 despite that Philippines economy is coping with the pandemic. Early in March 2020, PEZA was avante-guard in implementing great balancing acts in order to keep operations of hundreds of ecozones that directly employ 1.6 million Filipinos.”

Based on the latest report from PEZA ecozone about the operations for the period of September 21-26, 2020, 87% of the total PEZA registered companies in different types of ecozones are operational. Such 87% is constituted by 2,620 of companies nationwide regulated by PEZA. Breaking down this numbers, PEZA recorded that IT/BPO sector is 83% operational, while manufacturing is 90% operational.

Despite reported positive cases in some areas of some ecozones, there were only three deaths reported from PEZA registered ecozones nationwide.

“Beyond the pandemic, PEZA’s goal is to leave a legacy to Philippine investments and regions nationwide as we reach the last two years of the Duterte administration,” said Plaza.

“We will leave a legacy that is implementable within the last two years of the Duterte administration. This includes rebuilding the PEZA Pasay building and the Compensation and Position Classification System (CPCS) that are important as PEZA spreads services to regions nationwide. Unfortunately, the CPCS has not been finalized by the previous administration that affected the morale and compensation of long-time workers in PEZA,” said Plaza.

“We are adopting the Thinking Globally, Acting Locally campaign. The reason for this is exports compete in a global market while export incomes help generate dollar income to the national economy. In relation to this, ecozones are the key economic drivers to attract Foreign Direct Investments (FDIs) that will pave the way for the goal of building an export and production-driven economy—moving beyond a consumption and import-driven economy,” said Plaza.

“Achieving that goal of export and production-driven economy needs that efficiency factors for investments to be addressed. That is why PEZA takes the initiative of implementing the Development Outreach for Labor and Livelihood Advancement of Resources (DOLLAR) program,” Plaza added.

DOLLAR program aims to enhance the human capital, resources, and idle lands in the country. It is specifically in support to the Administrative Order (AO) No. 18 signed by President Duterte which is about “Accelerating Rural Progress through the Robust Development of Special Economic Zones in the Countryside”.

Thinking globally, Plaza envisions “Philippines as active contributor to the global supply chain as top performer of exports from different types of ecozones.” In this view, the PEZA Chief underlined the importance of empowering domestic enterprises, LGUs, State Universities and Colleges (SUCs), and building partnerships with private sector to prepare the country to more diversified investments.

Plaza also built partnerships with SUCs in developing their hectares of idle lands into Knowledge, Innovation, Science and Technology (KIST) Park that is haven for new technology transfer and making the country as research and development and education center in Asia.

“Part of being investment haven is that we transform or keep harnessing Filipinos to be world class, multi-knowledge, multi-skilled, and world-class workers in every region of the country who are equipped with knowledge and skills needed amidst new technology and new ecozones. Hence, in DOLLAR program, PEZA facilitates human capital development through skills matching and training and identifying the same through the Special Economic Zone Institute,” said Plaza.

PEZA together with DTI and DOLE launched on July 29 the DOLLAR programs Job Expo and online skills training. In an online platform which can be found in PEZA website, the public, any interested Filipino working age, can search the available jobs which is a total of 69,081 and counting which are located in PEZA registered companies and ecozones. The vacancies are open for all unemployed Filipinos and repatriated OFWs, with jobs for newly graduates and under work-from-home arrangements being offered.

Different types of ecozones as drivers for development

“PEZA is going beyond the traditional perception that ecozones are primarily or merely just the manufacturing or assembling type. In fact, there are different types of ecozones that can be established in idle lands depending on the viability and apt to the natural resources available in the area,” said Plaza.

Plaza explained that “PEZA can do more in partnership with private developers or public ecozones into developing smart cities or townships within cities. We are helping to build metropolitan areas with the presence of economic zones as the key driver for economic development.”

As PEZA reached its 25th year this 2020, Plaza initiated the master-planning or redesigning of the 40-year old public ecozones located in Baguio, Cavite, Angeles, and Mactan. These are old concept of industrial parks. “Now we are turning them into models of green, healthy and sustainable, smoke-free smart industrial cities.”

Anchored on the mission to fully industrialize the Philippines with different types of ecozones and become an investment haven in Asia, Plaza said that addressing the efficiency factors of investments is important to attract investors and urge expansions to various regions. Efficiency factors include the ease of doing business, cost of doing business, supply chain, power and water rates, labor rates and labor capabilities, digital connectivity, peace and order, and international connectivity and logistics infrastructures, backward and forward linkages among others.

So aside from tax incentives administered by PEZA, Plaza urge whole-of-government support to maintaining and enhancing the Philippine competitiveness for exports and ecozone investments saying that there’s tighter competition among neighboring countries to keep investors and attract new ones.

“In an atmosphere of world recession and export companies looking to consolidate their resources and transferring to other profitable countries with better incentives, we must seek to assure our current investors that the Philippines remains the best investment haven hub in Asia because of our one-stop, non-stop shop, and continuing improvements in the country’s efficiency factors” said Plaza.

The PEZA Chief lauds President Duterte’s signing of AO No. 18 last 2019 which ordered the spreading of development of ecozones to the countryside. “This paves the way for utilizing and making idle lands productive and for bringing about the transfer of technology.”

President Duterte reiterated the importance of AO No. 18 during his fifth State of the Nation Address on July 27, 2020.

“Last year, I said that distributing economic and business activities is imperative to our country’s sustained and equitable growth. Today I reiterate that statement. I issued AO No. 18, directing concerned agencies to strengthen the development of Special Economic Zones in areas outside Metro Manila,” said the President.

Plaza underlined that President’s issuance of AO No. 18 evidenced the importance of ecozones in every region and is key for spreading development to the countryside. “LGUs that host the top public ecozones like Cavite, Mactan, and Baguio are very progressive and able to generate employment, multiplier effects, reducing poverty and bringing social progress. Regions with the most number of ecozones are in fact the top ranking regions for the country’s GDP. Host LGUs of ecozones are models of how ecozones bring progress and many LGUs now are hoping to replicate this,” said Plaza,

Before her appointment in PEZA, Plaza has already had a fruitful three consecutive terms in the Congress and with the other government agencies. In 1987, Plaza was elected as a congresswoman of the 1st District of Agusan del Norte, making her the youngest Congress Representative in the Philippine History. During her term, she has made major amendments to the Balikbayan Program and the Tourism Infrastructure Bill.

A Brigadier General of the Armed Forces of the Philippines Reserve Force, Plaza is also trained on Crisis Resolution and Management at Melbourne, Australia; National and International Security Management at JFK School of Government of Harvard University; Preparing and Managing the Consequences of Terrorism at the Civil Military School of the National Guard Bureau in San Luis Obispo, California; and at the Asia Pacific Center on Security Studies in Honolulu, Hawaii.

Trainings both domestic and international have honed Plaza as a Crisis-Oriented Leader and a National and International Security Administrator.