Pasay City – In continuous pursuit to attain socio-economic development in the Philippines, Philippine Economic Zone Authority (PEZA) Director General Charito ‘Ching’ Plaza has encouraged more Malaysian stakeholders to explore more investment and business opportunities in the country and promote the economic zones as a viable location for their industries.

This comes after the October 14 Global Biz with PEZA featuring Malaysia which was attended by Philippine Ambassador to Malaysia H.E. Charles C. Jose, Malaysian Ambassador to the Philippines H.E. Norman Bin Muhammad, and representatives from PEZA-registered Malaysian enterprises to discuss promoting PEZA ecozones for various industries.

The PEZA Chief said, “At present, we have a total of 56 Malaysian enterprises registered and located in PEZA ecozones. These Malaysian companies have generated PhP 17.571 Billion of investments cumulatively from 1995 to June 2021, and as of August 2021, these companies employ 10,998 workers and contribute $52.599 Million of exports.”

Benefits of investing in ecozones

Director General Plaza highlighted the Philippines as “the only country granted by the European Union Parliament the Generalized Scheme of Preferences Plus (GSP+) status among ASEAN countries and we are also expecting for the renewal of our GSP+ status in the USA.”

“Our country is also waiting for implementation of the Regional Comprehensive Economic Partnership (RCEP) which is seen to enhance our businesses' participation in the global value chains given that this agreement will promote partnerships between the ASEAN nations, China, Japan, Australia, New Zealand, and South Korea,” the PEZA Chief noted.

Plaza also emphasized the rich natural and human resources with vast lands for different types of economic activities in the Philippines as some of the many factors that local and foreign enterprises are looking for in doing business in the country.

Meanwhile, His Excellency Charles C. Jose recognized the importance of economic zones as these boost the Philippine exports and foster employment growth.

According to the Philippine Ambassador to Malaysia, “Benefiting from decades of investments and rising investor appetite for manufacturing projects, economic zones in the Philippines have become an important export promotion tool and investment destination.”

Further, the Malaysian Ambassador said that while the COVID-19 pandemic has crippled the economy and businesses worldwide, “It is the [various] businesses that live to pivot effectively and flexibly emerging from the pandemic stronger than ever.”

On the part of the Malaysian Chamber of Commerce and Industry of the Philippines (MCCIP), President Hans How Han Hui said, “The Philippines has a young and dynamic population and geographically, our countries are [very] near to each other. We also have similarities in terms of culture and language skills which serve as a potential market to tap on in the long run.”

Of the new types of economic zones that PEZA has introduced, Director General Plaza highlighted the halal hubs and production economic zones where Malaysian investors can locate and expand their industries particularly in the countryside.

“With the Republic Act 10817 also known as the Philippine Halal Export Development and Promotion Act of 2016, and Republic Act 11439 or the Islamic Banking Act, our country is poised to becoming a significant player in the global Halal industry,” Plaza noted.

“Given the Malaysians’ contribution in our economy, which is vital especially during this pandemic, we must continue to attract more Malaysian investors to come and invest in the Philippines and widen our reach for sectors unique only in Malaysia,” she emphasized.

To date, PEZA manages 415 economic zones nationwide which host 4,665 locator companies that directly employ 1.6 million workers. PEZA has also generated P32.057 Billion of investments and exports amounting to $30.177 Billion during the first half of 2021. 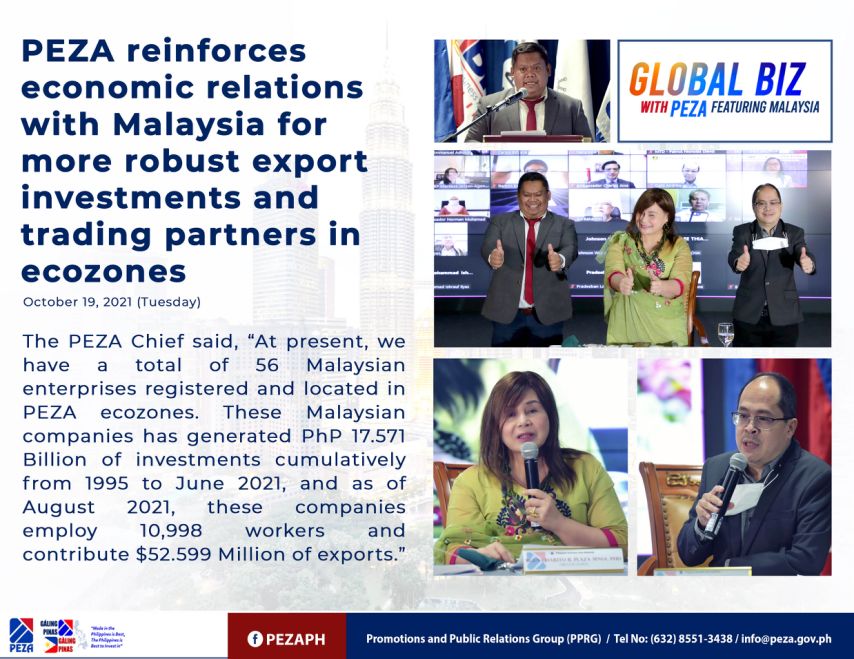