Plaza said, “EnPlus, a Korean company, is [now] our partner in investing in the countryside and believing in [the] Philippines as an investment haven in Asia. We appreciate EnPlus in their commitment and alliance with us towards making the Philippines a clean, sustainable, and environment-friendly country.”

ENPLUS will manufacture and supply electric cars and electric jeepneys in the Philippines.

According to Plaza, “EnPlus will be our first electronic vehicle manufacturer to be registered under PEZA where they can avail special incentives for pioneering projects.”

“EnPlus invests PhP 5 billion to manufacture and operate facilities of electric cars and electric jeepneys in municipality of Pulupandan (Port of Pulupandan) which is situated in Negros Occidental,” the Director General added.

The MOU Signing with PEZA and EnPlus is in line with the Agency’s goal for a resilient economic zone development specifically in regions outside Metro Manila.

In efforts to contribute to the reduction of the country’s carbon emission, the PEZA Chief believes that “Using EVs are better for our environment as they emit fewer greenhouse gases and air pollutants than vehicles using petrol or diesel. In the global context, electric cars have yet to be mainstreamed.”

Meanwhile, the CEO and Chairman of EnPlus, Ahn Young Yong has expressed his gratitude to PEZA. He said, “EnPlus really appreciates partnering with PEZA in supplying electric vehicles.”

Moreover, he added that “We are also thankful to the Philippines for [allowing us] to supply more than 100 units of pump trucks, water trunks, aerial ladder and rescue trucks last year in the country.”

The EnPlus CEO also noted, “We’d like to make a better world and provide more fire trucks and electric vehicles to the Philippines. With this, we would like to expand our business in your country to manufacture environment and energy-friendly vehicles starting with your jeepneys since they are the most popular mode of transportation in your country.”

On the part of PEZA, the Agency will provide a 30-hectare land to link prospect industries to EnPlus for joint investment ventures and other related agreements for eligible projects of PEZA.

Further, according to a special advisor of the PEZA Director General, Mr. Charlie Wee, he shared that, “EnPlus has already donated a fire truck and will donate ambulances to PEZA which will be shipped next month."”

Under the signed MOU, PEZA and EnPlus will strengthen cooperative approach in the means of business match making, conducting special briefings, and roundtable discussions to achieve the middle-class status of the Philippines in the years to come and to maintain economic, greener, and sustainable growth in the country.

Of the new types of economic zones that PEZA has introduced, Director General Plaza highlighted the halal hubs and production economic zones where Malaysian investors can locate and expand their industries particularly in the countryside.

“With the Republic Act 10817 also known as the Philippine Halal Export Development and Promotion Act of 2016, and Republic Act 11439 or the Islamic Banking Act, our country is poised to becoming a significant player in the global Halal industry,” Plaza noted.

“Given the Malaysians’ contribution in our economy, which is vital especially during this pandemic, we must continue to attract more Malaysian investors to come and invest in the Philippines and widen our reach for sectors unique only in Malaysia,” she emphasized.

To date, PEZA manages 415 economic zones nationwide which host 4,665 locator companies that directly employ 1.6 million workers. PEZA has also generated P32.057 Billion of investments and exports amounting to $30.177 Billion during the first half of 2021. 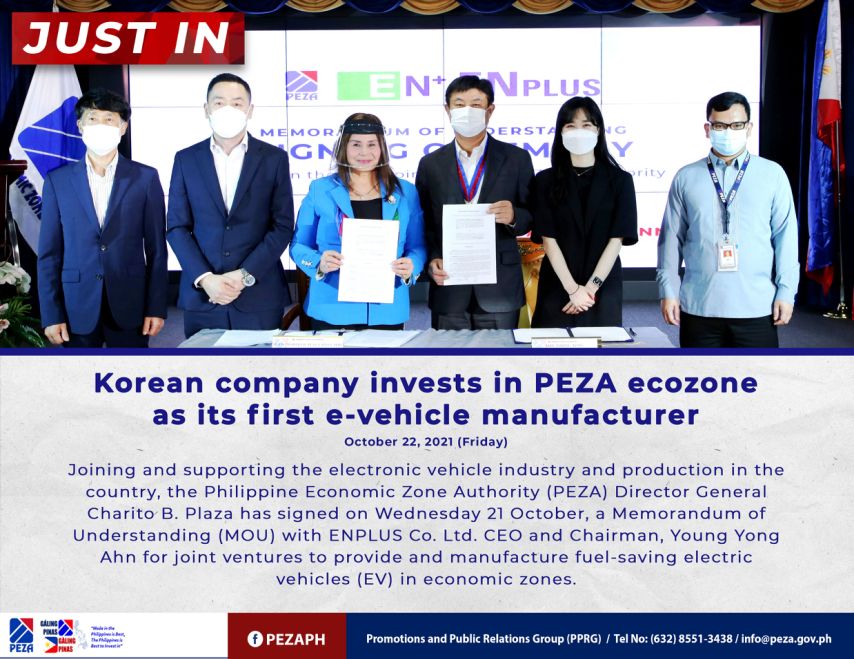