This comes after PEZA, PRC, and the Office of Senator Gordon conducted an Online Nationwide Forum on Vaccination and Reviving the Economy with over 1,000 participants from ecozone locators and industry stakeholders last Friday, August 13.

The MOU Signing with PEZA and PRC adds to Director General Plaza’s vision of safe and secured ecozones with similar Memorandum of Agreements (MOAs) entered with the Armed Forced of the Philippines (AFP) and the Philippine National Police (PNP).

“We are one with Sen. Gordon, the PRC, and the national government’s efforts to obtain herd immunity through COVID-19 vaccination that shall result to the full reopening of businesses and bring back our vibrant and thriving economy,” stated PEZA Chief Plaza.

In keeping ecozones safer against the COVID-19, the Director General further added that PEZA is continuously performing its ‘balancing acts’ in helping registered enterprises. “All PEZA ecozone workers, especially our IT-BPO workers, are now included under the A4 priority group in the government’s COVID-19 free vaccination program,” the PEZA Chief said.

Meanwhile, Gordon emphasized the importance of reviving the country as a whole and strengthening the investment promotion agencies (IPAs) as they are an important tool to attract more investments, generate jobs, exports, and other economic opportunities in the Philippines.

The Senator said, “Lahat tayo ay kailangan magsama-sama and we all need to get vaccinated. The COVID-19 is dangerous which is why being tested, getting vaccinated, and following safety health protocols are important.”

With the increasing COVID-19 Delta variant positive cases and the continuous vaccination of the general public, Special Adviser of the National Task Force (NTF) on COVID-19 Dr. Teodoro Herbosa emphasized the four (4) Cs towards gaining more information on the pandemic and the importance of disaster partnering.

Dr. Herbosa said, “Communication, cooperation, coordination, and collaboration are the important Cs that we should all be considering in fighting against the COVID-19.”

He likewise noted that the Philippines is doing well in the world ranking despite the ongoing pandemic.

The NTF Special Adviser highlighted, “As of July 2021, the total positive cases in the Philippines amounted to more than 1.5 million with 47,996 active cases, and 1.8% fatality rate. There are also low positive cases per 100,000 population with only 1,385.”

“Our measures are actually good in preventing transmissions but not so much the same in our economy since many economic industries were affected,” Dr. Herbosa added.

Dr. Herbosa also estimated that around 1.2 million people were saved from the pandemic when strict lockdowns started in the Philippines.

Meanwhile, on Delta variant cases, he explained that Delta is rapidly spreading around the world, is more transmissible, and is taking predominance of the Betta variant [from South Africa].

He said, “Of the new [positive] cases particularly in children, many are from Delta. As such, one vaccine dose is less effective as compared to two doses.”

In support to Dr. Herbosa’s statement of attaining vaccine deployment in the Philippines before 2021 ends, PEZA Chief Plaza said, “With the rollout of vaccines and the implementation of ecozone vaccination program, the ecozone industry can help contribute to the government's attainment of 70% herd immunity within the year and the country's full reopening of the economy and transition to the new normal.”

As part of the online nationwide forum, PEZA Director General Plaza and Philippine Red Cross Chairman and Senator Richard Gordon signed the Memorandum of Understanding (MOU) on the facilitation of disaster preparedness programs in economic zones.

Under the signed MOU, PEZA and PRC will carry out measures geared towards enhancing the coordination on technical assistance and the capability building in adopting the Disaster Management Services (DMS) core programs in PEZA economic zones.

PEZA Chief Plaza said, “I thank Sen. Gordon and the Philippine Red Cross for this great partnership in making our country better and stronger. This partnership will allow us to explore opportunities for joint cooperation in amplifying disaster risk reduction and become emergency responders to better equip us against manmade and natural disasters.”

The President of Semiconductor and Electronics Industries in the Philippines Foundation, Inc. (SEIPI) Mr. Danilo Lachica also showed his support to the MOU Signing between PEZA and PRC.

Lachica said, “Thank you Director General Plaza and Sen. Gordon for your undying support especially to the electronics industry. Over the years, SEIPI has been supportive of PEZA and PRC’s initiatives such as in blood-letting and industry CSR donations.”

Likewise, Sen. Gordon described the MOU Signing as “the hallmark of the exercise of humanitarian citizenship.”

Gordon said, “With this signing, all PEZA and PRC staffs, employees, and locators must take to heart that we must live in a world characterized by our love of humanity and our service to our fellowmen.” 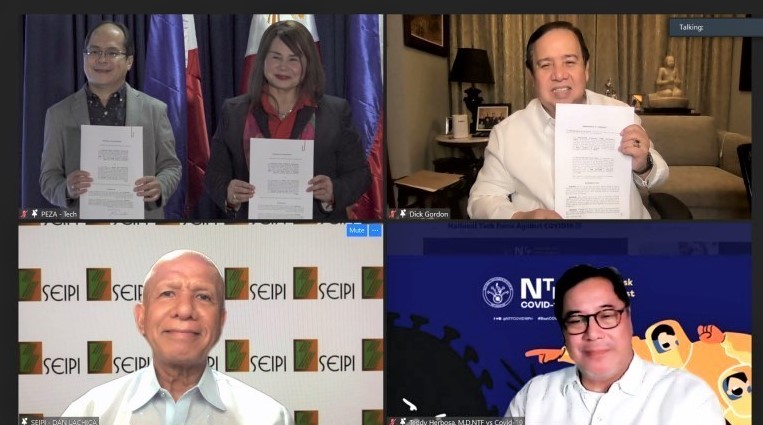