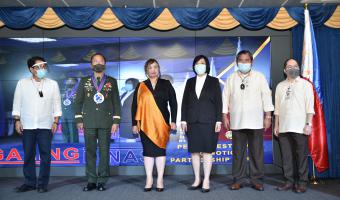 The PEZA Chief delivered her second SOPA speech which focused on the agency’s performance, vision, programs, the current and future directions of PEZA. The SOPA speech served as an avenue for Director General Plaza to report to all PEZA officials and its employees, its partners, and stakeholders the performance, updates, and accomplishments of PEZA during the previous year as well as the agency’s new projects and programs.

Plaza proudly stated that PEZA didn't slow down amidst the COVID-19 crisis, but took the challenge and threats into opportunities. She also thanked PEZA’s locator companies for choosing the Philippines and the PEZA ecozones for expanding their businesses in 2020 despite the pandemic.

The Director General noted that “PEZA had generated PHP 95 billion of investments with 300 projects registered for the period of January-December 2020. As of October 2020, PEZA also generated US$ 45.085 billion of exports and created 1,541,259 jobs. This also allowed PEZA to remit to the national government an accumulated amount of PHP 24.097 billion from 1995 to 2020.”

Hon. Presbitero Velasco, Jr, Chairman of the Union of Local Authorities of the Philippines (ULAP), applauded PEZA for its dynamic and continuous effort to perform its mandate at its best despite the current difficulties caused by the COVID-19 pandemic. “Like PEZA, ULAP envisions to attain total development of the Philippines by accelerating growth in our Local Government Units in every region, particularly in the countryside. It is high time for our regions to enjoy social progress and achieve inclusive growth that brings development and livelihood outside Metro Manila.” He said.

From the Central Bank of the Philippines, Deputy Governor Chuchi Fonacier also commended PEZA and underlined that “the Philippine Peso remains market-driven supported by sound macro-economic fundamentals and is considered as one of the strongest currencies in the region.” She also noted that BSP aims to fuel the country’s economic recovery with a more responsive and sufficient banking system heeding to the nationwide call for more productive activities in critical sectors of the economy.

Lt. Gen Sobejana said, “I urge PEZA to continue being true with the agency’s primary objective of providing a globally competitive environment for investments.” Likewise, the AFP vows to protect the investment of our country’s investors assuring peace and security on economic zones.

According to him, DOLE fully supports PEZA’s efforts for industrial peace and harmony in ecozones as it is caring for Filipino workers’ welfare. “DOLE shares PEZA’s value for labor and environment ensuring that statutory rights of workers in economic and freeport zones are upheld and protected,” the DOLE Secretary noted.

The Philippine Statistics Authority (PSA) reported in the last quarter of 2020 that, “Only PEZA [among the IPAs] registered year-on-year growth in foreign investment commitments during the July-to-September period with P20.3 billion, up to 97 percent from P10.3 billion last year.”

Plaza noted that “PEZA had generated PHP 95 billion of investments with 300 projects registered for the period of January-December 2020.”

Just this January 2021, the PEZA Board approved a total of 24 projects, which are seen to employ 5,601 workers and bring PHP 11.308 billion of investments. “This is a 139% increase from the PHP 4.726 billion investments PEZA generated last year in January 2020.” PEZA Chief added.

PEZA is also known for its best practices among economic zones worldwide. Various organizations and government institutions locally and abroad have recognized these practices that contributed to the ease of doing business in the Philippines.

The US Department of State lauded the Authority in its 2020 Investment Climate Statements saying, “The business environment is notably better within the special economic zones, particularly those available for export businesses operated by the Philippine Economic Zone Authority (PEZA), known for its regulatory transparency, no red-tape policy, and one-stop-shop services for investors.

Likewise, the PCOO awarded PEZA during the 2020 Freedom of Information or FOI Awards with a Special Citation conferred to government agencies who have exemplified an untiring dedication and commitment to the FOI program during the COVID-19 pandemic by keeping its channels of information open and active to the public.

The National Economic and Development Authority (NEDA) conducted the cost benefit analysis (CBA) from 2016 to 2018 last year. Based on NEDA’s initial CBA study, an average of 94.5% of all exports were made by registered business enterprises (RBEs) under PEZA and these RBEs also acquired most imports (92.7 to 97.0%).

PEZA Chief said, “The findings in the preliminary study proves the importance and effectiveness of the tax incentives being given to investors and their presence in the country.”

Last December 2020, the PEZA Board approved the adoption of the new 10-point programs and special projects which shall be called “PEZA’s Transformational Roadmap” in the next 25 years.

Director General highlighted the new Transformation Roadmap as “a blueprint that is a legacy and continued guideline to unlock the potentials of Philippine industries, of enhancing human capital and natural resources of our country towards full, sustainable, and green industrialization.”

PEZA will collaborate with other government bodies to address the efficiency factors that expanding multinational companies are considering in making their investment decisions. This is in line with the signing of Administrative Order No. 18 in 2019 by President Rodrigo Roa Duterte which mandates various government agencies to develop and support ecozone creations in the countryside.

“PEZA has lived 26 wonderful years. And as we proceed to the next years of growing, improving, and developing together, we pray that we will all keep the same indomitable spirit and culture of excellence that set us apart from the rest.” said the PEZA Chief.