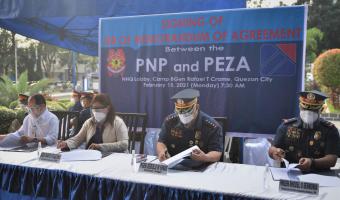 The signing of the JIPCO IRR between the PEZA and PNP coincided with the Monday Flag Raising Ceremony, Conferment of Award, and the Memorandum of Agreement Signing between PNP and Anti-Money Laundering Council (AMLC).

The signing of the IRR between the PEZA and PNP aim to contribute to providing a safe and globally competitive business environment in economic and freeport zones.

Plaza expressed her gratitude to the PNP. She said, “As we aim to sign the IRR, on our part in PEZA, we are grateful to PNP’s leadership in sharing with us our cherished mandate and value to uphold the rights of Filipino workers or labor and uphold environmental laws – two of which are the non-negotiables in PEZA’s regulation of industries.”

The PEZA Chief said, “I am confident that investments in the economic zones will be secured and maintained as it continues to prosper, thus, producing more jobs and generating investments, and economic growth for Filipinos.”

Police Brigadier General Julius Lagiwid thanked PNP Chief Debold Sinas for building alliances between industry players and workers’ communities in partnership based on encouragement and empowerment. Lagiwid said, “Finally, we can collaboratively protect the investment integrity of this country making the Philippines an ideal investment destination in Southeast Asia.”

On March 26, 2018, the PEZA and PNP signed a Memorandum of Agreement with the aims to strengthen their partnership for change and development through the creation of the PEZA-PNP JIPCO.

Under the IRR of the MOA between the PEZA and PNP, their partnership is also designed to compose the teams to be assigned, including female police officers to address security issues and cater to complaints, queries, and other concerns in the workplace with the end in view of promoting industrial peace and respect for the rights of labor and management towards achieving a more conducive business environment in the ecozones.

According to the IRR, the PNP is tasked to strictly observe police operational procedures (POP) and respect for human rights shall be paramount at all times.

Likewise, the PEZA Police Force and the PNP will now bring the services of the PNP closer to investors and workers. “We hope to make a more equipped PNP and our workers by undergoing training seminars that are different from the program of instruction adopted by the PNP,” Plaza noted. Such trainings will focus more on police relations, crisis resiliency, civilian resistance, and seminars on IED Awareness, Bomb Threats Management, and other related life-saving techniques. Likewise, the IRR signing will enable the PEZA Police Force to craft and implement crime prevention measures, crisis control, and contingency plans in public and private economic zones.

Plaza also emphasized peace and security as important factors of investment in partnership with PNP. “Through the JIPCO and its IRR, we believe this will harness the ease of doing business (EODB) and help provide a safe and secure ecozone environment for all of the Filipino and foreign workers, locators, and investors in ecozones,” said the PEZA Chief.

Meanwhile, Sinas expressed his gratitude and appreciation to PEZA saying that the signing of the IRR best describes their further efforts in protecting the country particularly to the security of economic zones. “With this IRR, the PNP and PEZA will work together towards sustaining a competitive Philippine export industry and integrated without compromising public safety,” Sinas said.

The PNP Chief also added that the IRR is crafted fair and square for the Filipino people which also possess a strong message to investors most especially abroad that the Philippines is serious in its objectives which PEZA has always upheld through its “one-stop nonstop shop policy”.

With the successful implementation of the JIPCO IRR, PEZA and PNP can fulfill the slogan of JIPCO, “Together, we drive the force of our country’s global competitiveness and foreign preference as an investment destination.”